Not sure where to go with this one but let’s give it a shot. I think my family and close family friends read this so I’ll try to minimize being so gross.

Also… I think my best friend’s future wife reads these blogs so I’ll do my best to block her from ever reading this… hopefully. Snitches get stitches.

My best friend is getting married and I’m thrilled. He’s informed me about her throughout the whole relationship– between the first time they met at a college party and every milestone that took place between then and when he got on a knee and asked her for forever.

The guy is a romantic asshole and he makes me look terrible… but I love him like family. Congratulations and stuff. But he asked me to be his Best Man recently and, jokes aside, meant the world to me.

Still reading this? Good. Because the smut blogger part of my brain lit up. Business mode. Bachelor Party. Let’s get gross.

Knowing absolutely nothing about what he was feeling, I then texted him “outdoors or Vegas?” He responded with “outdoors.” Perfect… that’s my area of expertise. “How many?” He said five. All the info I needed.

I grew up fishing with him and we always enjoyed it. I also know no bachelor party would be complete without the drunken guy asking “where are the strippers?” A light bulb went off in my head… how about we combine the two? Strippers on a boat while fishing? Holy shit.

A quick google search “Cape Cod Strippers” was next and I got very bizarre results. It’s amazing how many fisherman are illiterate and misspelled the species of fish ‘Striper’ with two ‘P’s. However, progress was made… I found Cape Cod strippers and ohhhh boy was that a rabbit hole I’m not exactly proud of.

I asked Google “strippers on Cape Cod” and got results that certainly gave my computer a thousand viruses. I then asked “strippers on charter boats” and found a hilarious internet thread of creeps. Guess what state? 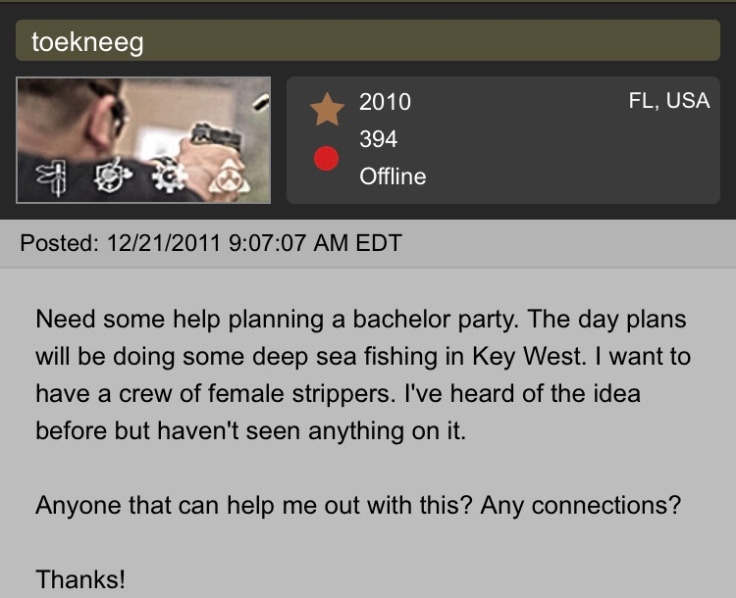 That was the start of the thread. The remainder of the thread was other posts just asking for pics of the trip along with some racial slurs. Given the legitimacy of the guy’s profile picture, I assume he’s an expert in acquiring exotic dancers on the high seas.

That being said… that was the closest answer I got to the idea. I need help. I don’t want to call the Cape Cod stripper hotline and ask these questions. I’ve been to strip club or two in my lifetime and never fully understood how I should act. If I got on the phone I would freeze up.

This is a big decision for me and I want to at least gather any and all info I can to make this dream a reality. Or at least get suggestions on a real idea to allow my buddy to get the best damn bachelor party he deserves.

DM/Text me ideas. This is probably the most seriously I’ve ever been in a blog.